Why do we use Minecraft at Makerkids? 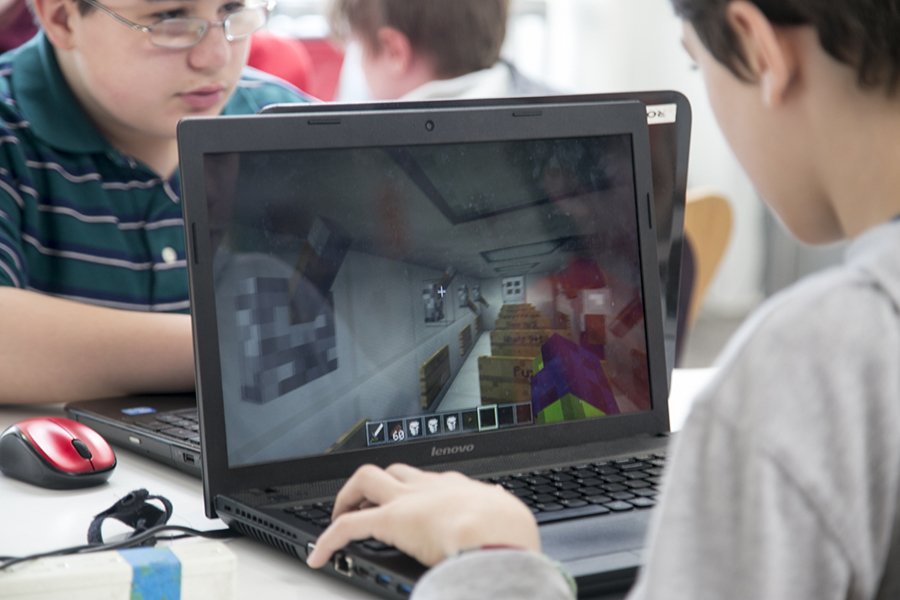 When it comes to computer games, Minecraft is definitely tops with kids. It lets them build a Lego-like world with their friends. From farms and cities to elevators and roller coasters, kids are creating things they may have otherwise only dreamed about. Don’t forget about exploring dungeons and slaying zombies! While they’re doing all this, they’re also learning important computer and social skills, so it’s a win-win.

Minecraft’s programming and configuration files are also very accessible if they really want to get technical. One way to get kids excited about folders and files with code is for them to see the results of their work playing out in their Minecraft world. Here are some of the reasons why we use Minecraft at Makerkids:

These days it’s all about the touchscreens…tablets, phones, you name it and kids are using them. While these may be fun and easy to use, they don’t teach keyboard and mouse skills. When kids play Minecraft, they get to learn these skills too.

While just playing Minecraft allows kids to do a lot of fun things, a whole new world of possibilities opens up if they start to run commands in the game. For example, if you want to be able to teleport to your friends or jump over mountains, you need to open the command prompt and run a text-based command. This is common when communicating with all computers.

One of the most common requests we get from kids coming to Minecraft at Makerkids is to learn how to install mods. Those are changes to the game that let you add blocks, objects, or any creature you can imagine. In order to do this you need to download files, navigate through folders and move folders all around. These are all core computer skills that may be hard to grasp and get the hang of without lots of practice.

One of the coolest things kids can do in Minecraft is to create a multiplayer server to invite friends. In order to do this, kids need to understand home networks and be able to create snippets that run Java code. They also need to track information about the players in databases.

When kids are on the internet they may be “talking” to other people, but there is no real old-fashioned socializing. At Makerkids anyone who is playing Minecraft with you is also in the same room with you. They are not just a name in cyberspace. They are a face sitting nearby. That’s why teamwork and problem-solving are big parts of the Minecraft experience. We introduce kids to some strategies and step by step guides they can use to deal with social problems. We also encourage open group talks about any emotional experiences the kids may be having at the time.

At MakerKids, Minecraft gets the creative juices flowing. Kids may make a volcano in Minecraft rather than from paper mache. They can also recreate the Eiffel Tower and explore other well-known sites around the globe. Nothing is off limits. Even the human digestive tract and routes up Mount Everest can be part of their Minecraft adventure.

The looks of blocks and characters in Minecraft are also customizable. Once kids understand where the game stores the 2d images (skins) that are wrapped around the models, they can use image editing tools to change them or make their own. At MakerKids, we also introduce graphic design concepts that allow everyone to better talk about art-related ideas.

One of the coolest things about Minecraft is Redstone. Redstone is electricity in the Minecraft world. It can allow kids to do everything from turning on a light at night to harvesting crops. It also lets them experiment with clocks, bit data storage and logic gates similar to real-world circuits. You could even build a computer chip that works as a full-fledged calculator. But that would take a few years!

Minecraft at Makerkids is much more than just a game. It’s a tool that can not only be used to teach lessons, but also one that can help kids grow in so many other ways. From social skills to thinking out of the box in a big way, Minecraft is helping to shape young minds and create the next generation of geniuses.